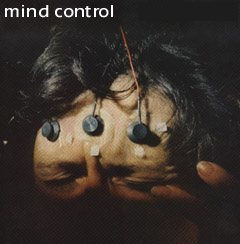 THE COVERT WAR AGAINST ROCK
By Alex Constantine

How government, organized crime and the music biz intermingle.

THE REVOLUTION
By R. U. Sirius

PSYCHIC DICTATORSHIP IN THE U. S. A.
By Alex Constantine

Bombing minds not bodies is the warfare of the new millennium.

Welcome to the SNITCH CULTURE, a surveillance society far more insidious and pervasive than anything George Orwell ever imagined. Elected officials from both political parties have spent decades building a vast domestic intelligence network to track every man, woman and child. The corporate media has supported these efforts, generating waves of public hysteria which have turned American citizens against one another and helped recruit a growing army of snitches.

Unscrupulous law enforcement officials have used these informants to compile millions of files filled with unfounded rumors and hearsay. Bureaucrats have pushed their snitches beyond legal and moral limits, with politically-motivated private operatives picking up the slack. Over the past 30 years, informants have fueled such well-documented, massive government surveilance operations as the Ghetto Informant Program, also the FBI's infamous Counter-Intelligence Program (COINTELPRO) and Project Megiddo, which incorrectly predicted a wave of domestic terrorism at the beginning of the New Millennium.

Covert actions have influenced this nations quest for international Superiority and continue to this day. Now, a new book describes in detail this secret side of American history in an interesting and entertaining way.

What is the Government Trying to Hide?

Go behind the scenes into little-known corners of the public record and discover how corporate America has worked hand-in-glove with the Pentagon for decades - dreaming about, planning and actually constructing secret underground bases.

"A must read for students of conspiracy, technology suppression, UFOs and the New World Order. Invaluable to researchers and investigators into the covert machinations of the Secret Government." -- David Hatcher Childress author of Man Made UFOs etc..

"This is a disturbing and important book, revealing a massive level of secret underground engineering activity on the part of the federal government. Why? And above all, why the compulsive, paranoid secrecy on the part of the federal monolith? The public deserves to know why its hard-earned money is being lavished on these strange, highly secret projects." -- Whitley Strieber author of Communion